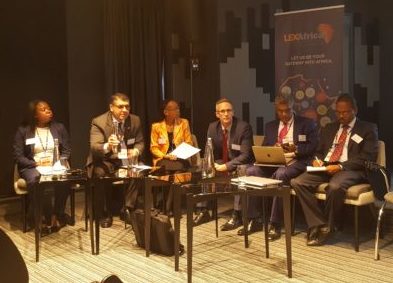 LEX Africa recently hosted a series of interactive panel discussions on policy progress and hindrances in the continent that affect its growth.

Among the topics covered at a recent LEX Africa seminar on Africa were high growth economies, mining, trade trends and developments in competition law across the region.

Dianna Games, CEO of Africa@Work and Executive Director of the South African-Nigeria Business Chamber opened the day’s talks with a look at the World Banks’ list of the fastest growing economies in the world.

Ms. Games noted that six of the 10 fastest growing economies in the world are found in Africa in 2018. She said the last time this was seen was nearly four years ago, before the commodities crash of 2014.

“What’s interesting about the list in 2018, [is that] six [of the] highest performing (African) economies… are not resource-dependent countries. That signals a kind of maturing of African growth.”

Ms. Games added that the list also revealed that there is no silver bullet with which governments can reduce poverty and achieve growth. She said the African countries on the list demonstrated that growth was dynamic to each one.

She said Ghana was a great example of how high growth potential could be affected by government policies.

“The problem with Ghana is what affects most African countries – its inability to reign in public expenditure and the fact that much of this goes on recurrent expenditure such as civil servant salaries, vote-buying exercises, vanity projects and so on. And, Ghana is still having this problem despite the fact that it has battled along with the IMF’s rescue plan over the past few years.”

Ethiopia, said Ms. Games, was another example of that has achieved high economic growth despite having had autocratic leaders and little democracy for many years until this year.

“… You’re looking at very autocratic governments; not much freedom of speech [or] freedom of political space, but very strong drivers of economic progress. There’s a vision in place and the government has been pushing that (growth), I guess hoping to offset the lack of democracy on some level by creating an economic success story.”

She posited that while even high growth economies experienced levels of poverty, governments were also in a position to see poverty as an option and not as a given.

“Economic growth is not a secret formula. It really is up to governments to do more about development and the problem we have in Africa now is that there isn’t enough being done to build sustainable growth and drive a new ‘Africa Rising’ narrative. Policies are often poorly implemented and some high growth rates are built on the shifting sands of poor investment in education and health in particular. I think that’s the one weakness that’s pervasive and which makes a lot of this (economic) growth unsustainable.”

Africa Rising is a tag given to a wave of high growth in economies from about 2012 spurred mostly by rapid increases in trade and investment from a China hungry for African resources and by exaggerated claims of the growth of an African middle class. Although the description helped to attract investor attention to Africa, many Africans believed it ignored strides already made by governments prior to that.

The day’s second session was on the topic of mining in Africa. Chris Stevens, Head of Mining and Resources at Werksmans in Johannesburg chaired a five-member panel discussion which covered big mining economies in Africa and the developments and high-level issues happening in these countries.

He posited that the reason why more community issues could be found in Africa than the rest of the world, was because mining companies often selected remote rural areas to develop, “…where there is no infrastructure, no towns and often where there are existing indigenous communities that operate according to a specific set of customs and laws, burial traditions and spiritual and religious connections to the land that transnational mining companies have to be cognisant of.

“The second interesting thing (about mining in rural land) is often communities develop around mines.”

He said in one example, a big mining company had applied to explore the land for mining, but before the courts had granted the mining rights, the existing community had developed around the mine because they foresaw the prospects of what would be produced.

Mr. Stevens said big mining companies should expect rigorous negotiations if they intended to mining in rural areas. He cited the case study of the Xolobeni community in the Eastern Cape of South Africa.

“…the community has actually instituted court proceedings to stop mining and…. it raised issues about displacement from homes… compensation, about lack of consultation and of course the spiritual and religious connections of the land prevalent in these rural, indigenous areas.”

He said the ripple effect of mining in rural land was that sometimes factions within the community could also form, as a result of some community members being pro-mining for the reasons of economic growth, and others being anti-mining for the protection of the environment and the degradation mining would result in. “So, these things can end up in bloodshed as well,” said Mr. Stevens in reference to the murder of a community member in the case of Xolobeni.

“Essentially the only way you’ll be able to resettle a community in a mining context is if you’re able to improve the lives. If you offer them something worse or the same, they are not going to move easily.”

Mr. Stevens said in the case of Marikana, in Rustenburg in the North West province of South Africa, an interesting case was presented for who should bear the responsibility of looking after the communities that surround a mining district.

The Marikana Massacre refers to a well-documented mining-related incident in which police killed 34 miners and wounded 78 others during a wage-related strike with Lonmin.

“There are also certain obligations under the mining charter to provide housing and that fuelled a lot of tension between the local community and also brings to the fore the issue whose responsible for the housing of communities… Is it the mine? Is it the government?”

He said the incident in Marikana was “a prime example of that conflict between who had responsibility and the community taking from both. And it resulted in bloodshed. Hopefully, we’ve learned a lot from that.”

Mr. Stevens said cemetery sites and the removal of gravestones was also a pressure point for mining rural areas. He added that “artisanal mining” or mining conducted by undocumented workers who mine the land illegally was also an increasing trend to look out for.

The seminar then progressed to a discussion around investment and developments in Africa.

Osayaba Giwa-Osagie, a partner at Giwa-Osagie & Co — a LEX Africa member in Nigeria — chaired the session. He said Nigeria has abundant natural resources, a vast workforce, and huge potential, adding that its geological location proved to be a very attractive feature for foreign investors.

“Nigeria has an ideal location and serves as a hub for the rest of Africa.”

“Last year was mixed in economic terms… While the economic growth slowed to 1.95 percent in the first three months of the year, Nigeria GDP has expanded for four consecutive quarters.”

Mr. Giwa-Osagie said the IMF forecasted growth to accelerate to 2.1 percent this year as opposed to 0.8 percent as at December 2017. He added that oil and food remain stable, prices rebound and this has provided more foreign currency to manufacturers who can use the means to import goods.

Nigeria was also listed as one of the most reformed economies in the world. Mr. Giwa-Osagie said the turnaround in growth was driven by growth in sectors like agriculture, manufacturing, construction, real estate, and finance.

“As at April 2018, the country’s foreign reserves has risen to USD43 billion.” He added that the last time this measure of growth was seen was in 2013.

Six other panelists from Kenya, Ethiopia, Mauritius, Mozambique, Botswana, and Tanzania also spoke about developments, opportunities, incentives and challenges in trade, investment and business in their respective countries.

For the next panel discussion, Pieter Steyn, chairman of LEX Africa, centered the session around developments in competition law in Africa.

Mr. Steyn said competition law in South Africa was very developed and the country has had a very active competition commission that had been practicing since 1999. The authority, he said, has handled cases concerning mergers, but also conduct, cartels and issues of dominance.

“It’s not a development that has happened in other African countries. Kenya and Zambia have got quiet established (competition) authorities; Mozambique has a relatively new authority; In Botswana, they just had recent changes to their act and in Angola and Nigeria a brand new law which is coming in.”

The panel for this topic was selected from countries where developments in competition law could be compared to each other such as Angola, Zambia, Kenya, Botswana and Nigeria.

Mr. Khatoun posited that it is Africa’s abundant natural resources which puts the region in an “enviable position” amongst foreign investor as “global demand for hard and soft commodities continues to grow…”

He said challenges in the form of volatile commodity prices have given governments in Africa the opportunity to reframe solutions and this has pushed ingenuity.

As several speakers at this LEX Africa summit have agreed, a significant part of the new mandate from African governments to reform their economies lies with policy change. Once this is done and paired with transparent implementation, the continent could very easily take the lead in becoming a global manufacturing and export hub.