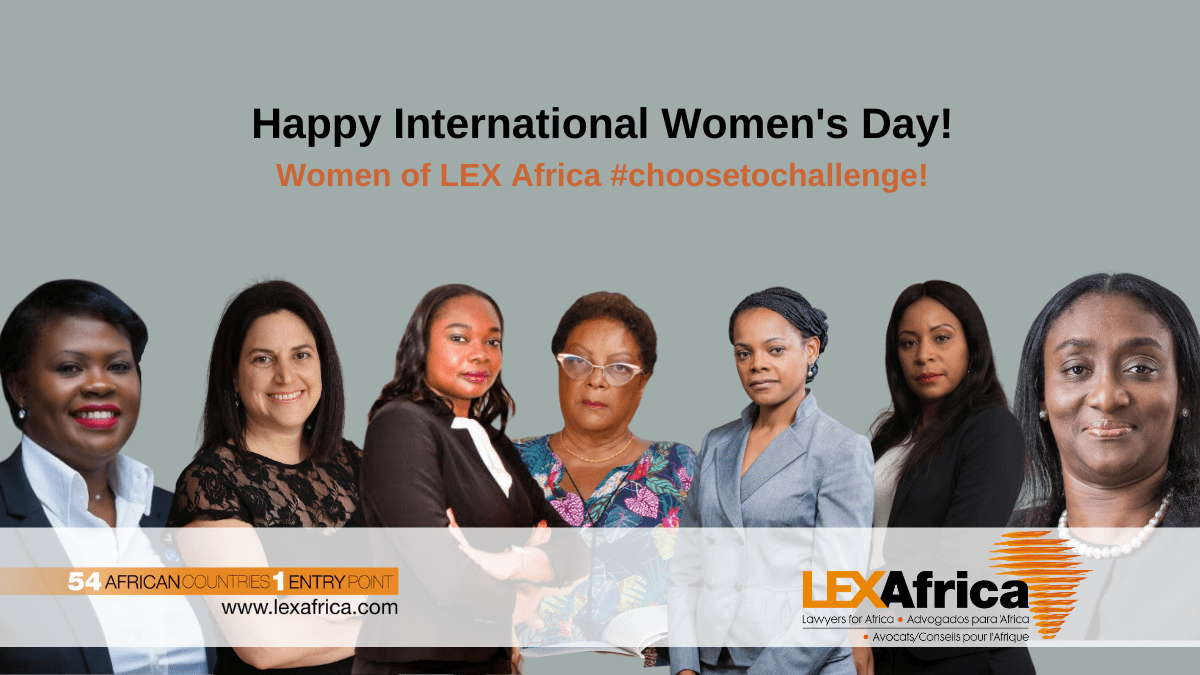 The women of LEX Africa choose to challenge this International Women’s Day!

The social, cultural and political achievements of women are celebrated on 8 March – designated International Women’s Day (IWD) by the United Nations since 1977. Perhaps more importantly, the day also marks a call to action to speed up moves towards gender equality.

This year, the IWD has a different look, thanks to the Covid-19 pandemic. There will be no large public gatherings and speeches and no marches in international capitals as has been the norm in recent decades. However, urgency in tackling gender discrimination and extending female rights will be emphasised as strongly as ever.

The theme for this year is “Choose to Challenge: A challenged world is an alert world and from challenge comes change. So let’s all choose to challenge. Celebrate women’s achievement. Raise awareness against bias. Take action for equality.

IWD sees a number of missions to help forge a gender equal world. Celebrating women’s achievements and increasing visibility, while calling out inequality, is key. Giving voice to the cause, leaders in all spheres have taken to webinars and websites, social media and traditional media, chat rooms and personal chat.

IWD is one symbol of sweeping changes in societal attitudes to women in recent decades – particularly in terms of their role in the workforce. In 1950, women constituted 30% of the US workforce, excluding farm labour and the self-employed. By 2000 this had grown to 47%; and, in 2020, America’s Bureau of Labour Statistics reported women workers had become the majority – at 50.4%.

Similar trends are seen in many countries in the West and in parts of Asia, with the UN estimating that women made up 38.8% of the global labour force in 2020.

The rise of women in leadership ranks has been slower, as evidenced by only 13 women (2.6%) numbered among CEOs of the Forbes Global 500 companies. This makes the “choose to challenge” focus most apt.

Female partners at LEX Africa’s extended family of legal firms across Africa have not been found wanting and have provided important leadership insights and inspiration in the contributions below.

It is significant that these professionals of distinction all cite “hard work” and “integrity” as values that should be instilled the next generation of women in order for them to succeed. Nowhere is there mention of women getting a career free pass because of their gender.

“Integrity, respect for others and perseverance are the three values I believe are essential to grow a successful businesswoman,” says Susan Barbara-Kumapley, partner at Bentsi-Enchill, Letsa & Ankomah in Accra, Ghana.

Asked about the most significant barrier to her professional progress, Jackie Jhala, a partner at Corpus Legal Practitioners in Zambia, says: “The need to prove that I am as good as or even better than my male counterparts.”

Answering the same question, Paulette Lopes, senior partner at Angola’s FBL Advogados, says: “To make our male colleagues look at me as a colleague and not as a woman … not as someone having a pretty face.”

Clearly there is still a way to go, even in Africa’s legal fraternity – arguably one of the most “gender friendly” sectors on the continent. As Barbara-Kumapley notes: “Respect is earned and cannot be demanded.”

No matter how successful women are in their jobs, they remain natural family carers and often face major challenges in balancing work and home responsibilities.

Wendy Rosenberg, Director at Werksmans Attorneys in South Africa, says “I don’t think it’s sustainable to give 100% to everything all of the time.  As woman we need to be kinder to ourselves and not sweat the small stuff. We also should not shy away from urging our life partners to pull their weight.”

Nelly Tiyago-Jinjika, a partner at Scanlen & Holderness in Zimbabwe, echoes the words of her counterparts when she comments: “It is very difficult to achieve a work-life balance.” She emphasises the importance of having a good plan that allows some flexibility in case of unexpected developments in daily life. “I have had to learn to say no… because the perpetual volunteer in me used to end up over-committed.”

Perhaps Jhala’s leadership advice best sums up the legal women’s collective voice: “…to be a leader, one should lead by example and should always seek first to understand and then be understood.”

A challenged world is an alert world. Individually, we’re all responsible for our own thoughts and actions – all day, every day.

The women of LEX Africa choose to challenge!