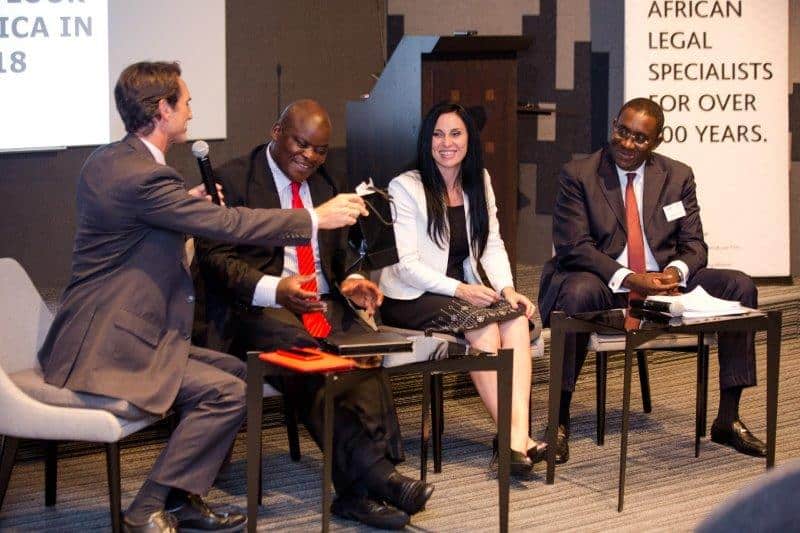 LEX Africa members from around the continent gathered at a seminar in Johannesburg to discuss Africa’s investment climate and private equity market, governance in Zimbabwe, and the future of Nigeria’s flourishing economy.

Quality goods, policy reformation that addresses the challenges of doing business in Africa and a welcoming environment for foreign direct investors are just three areas that speak volumes about the continent’s growing investment potential.

The positive perspective on the continent was shared at a seminar hosted by Werksmans Attorney’s and LEX Africa titled, An Outlook on Africa 2018. LEX Africa’s members from Nigeria, Zambia, Zimbabwe and Mozambique presented forecasts for each of their countries, delving into the economic climate, investment opportunities, reforms and challenges.

Sternford Moyo, Senior Partner of Zimbabwean LEX Africa member Scanlen & Holderness said in Zimbabwe, new leadership had managed to present an attractive, stable political situation to the global market. The change in presidents also brought with it fresh hope for widespread policy reform that promoted ease of access for foreign direct investors hoping to do business in the country. Mr. Moyo said Zimbabwe had enormous opportunities in the areas of agriculture, energy, infrastructure rehabilitation and mining.

Reformations were being applied to policies that previously limited foreign ownership in specific sectors of mining, to allow for a greater stake.

He said Zimbabwe had untapped mineral wealth that could be accessed proper equipment and improved technology. They key was to look for the potential within the challenges, to uncover the opportunity.

In particular, Mr. Moyo pointed to flooded mines and regions within Zimbabwe that could be explored for lithium, platinum, diamonds and gold. He said private equity investors with rehabilitation resources could enter these areas and find great returns in the medium to long-term.

Mozambican LEX Africa member Dr. Pedro Couto echoed Mr. Moyo’s sentiments. He said investor confidence in the sea-facing country was growing steadily. He urged investors however, to consider the long-term yield instead of doing quick business. Dr. Couto said amendments to laws pertaining to Foreign Direct Investment was proof that Mozambique was making itself as attractive as possible to the global market. Faster transactional processing was also being implemented for the international investment community.

“We are going to have a Local Content law… It’s a pure concept of a law that requires three investors to partner with those in the local sector. There is no mandatory 51 percent partnership… it is basically a requirement that in certain cases [and] in certain industries, you will need a Mozambique partner and a commitment to develop local business (as part of the investment deal).”

In March, Brazilian mining company Vale announced that it, together with Japanese partner Mitsui & Co, inked USD 2.7 billion funding deal to finance the Nacala Logistics Corridor (NLC) The rail system, when complete, will connect the Mozambique-based Moatize coal mine, to the Nacala port and will thereafter link up to Zambia through landlocked Malawi.

Dr. Couto said the rail system would certainly extend the reach of exported and imported goods further into Africa, giving ease of access into Asian markets as well.

Sharon Sakuwaha, LEX Africa’s Zambia partner said while the Zambian leg of the rail system — the Chipata-Petauke-Serenje railway — had experienced some delays in construction, on the policy side, government had mandated a heavy cargo and bulk goods policy that would see at least 30 percent of goods transported via rail. This would encourage investment in the rail transport sector as there was guaranteed traffic siphoned into the system.

Osayaba Giwa-Osagie, Senior Partner of Nigerian LEX Africa, said while Africa’s largest economy experienced a recession in the first quarter of 2016, for the first time in 25 years,  it had emerged in the second quarter, albeit sluggishly.

Mr. Giwa-Osagie said the situation arose from lower revenues of oil — Nigeria’s dominant export — but government had tackled the situation by trying to diversify the economy.

“Our oil production dropped to as low as 1.1 million barrel per day, but within 24 months it increased to 2.2 million barrels per day. With the efforts of the government to diversify the economy, we’ve seen an emphasis on agriculture (for example), the economy is back now. The government has also worked very hard to reform the way business is done in Nigeria. At the moment structures are being put in place to diversify the economy [and] policies are being introduced to make it easier for foreign investors to come to Nigeria.”

He said in the past four or five years, private equity companies have come into the country to buy into local companies.

According to the South African Private Equity and Venture Capital Association, Nigeria outperformed South Africa and Kenya in recording the continent’s highest value private equity deals between 2012 and 2017.

Ayo Akinwumi, Head of Research FSDH was quoted by Business Day as saying: “Nigeria attracted the highest private equity deals in the continent as a result of the business opportunities that investors see in country.”

Mr. Giwa-Osagie said the country was seeing private equity investment from all over the world, including New York to Senegal. “With the political stability, I believe Nigeria is the right place to come to at the moment (to invest). The population is there, you have educated people and you also have infrastructure deficit which makes it easy for people who have the capital and knowledge to come into Nigeria to fill in (the gaps).”

In December last year, Deloitte released a survey that indicated a generally optimistic view of private equity activity in Africa. The survey revealed that investors anticipated a more positive outlook for Sub-Saharan Africa over the 2017-2018 period and despite the oil price slump from 2014 and the continued slowdown in real GDP growth between 2015 and 2016 across the African continent, sentiment and confidence had shown a strong rebound.

The survey titled, “2017 Deloitte Africa Private Equity Confidence Survey: Translating potential into investment growth” revealed that most respondents across all three regions were investment ready and expected to invest more over the next 12 months.

Deloitte also predicted that competition for new investments would increase, particularly in East and West Africa; and consumer-focused sectors, which include food and beverages, agriculture, healthcare and financial services, would rank among top focus sectors for investors.

Ms. Van Lill said 2016 was a stellar year for exits, where over USD 1.5 billion in returns paid out, which was a high for the industry in the past 20 years. She said a downturn had been experienced in 2017, but the mood was changing. Ms. Van Lill said currently investors are reporting a positive shift in energy with the new leadership in the country and the optimism had spread across the region.

“According to the South African Private Equity and Venture Capital Association (SAVCA), a total of USD 6.5 billion has been raised for African private equity from 2011 to 2016, with a total reported deal value over the same period of USD 22.7 billion for 919 deals. In 2016 alone, 145 deals were reported, totaling USD 3.8 billion.”