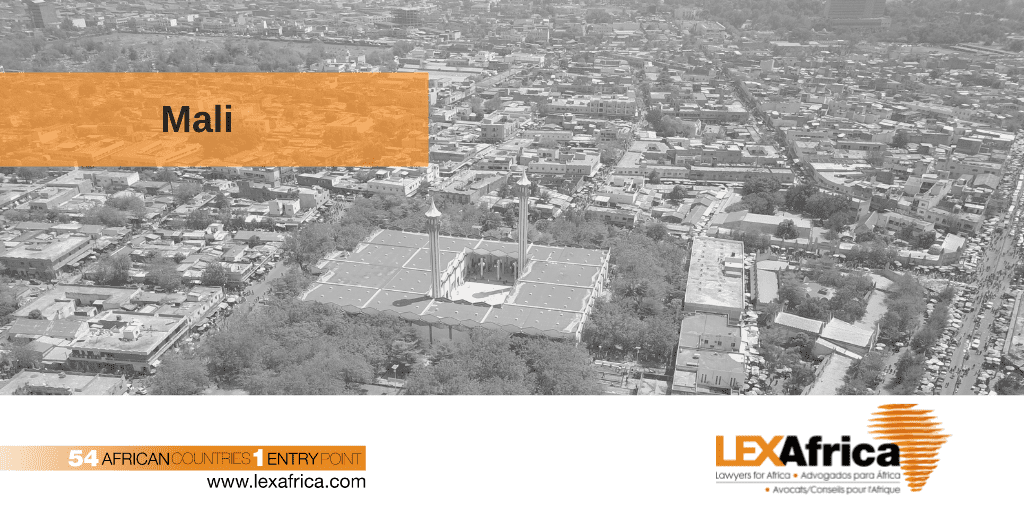 Mali is a large landlocked country in western Africa, and in the distant past it was one of the richest empires in West African History.

Its most famous ruler was King Mansa Musa, who ruled from 1312 to 1337, reknowned for his wisdom, and said to be the wealthiest individual in the history of Africa and one of the richest in the world.

When King Musa travelled to Mecca on a pilgrimage, he distributed so much gold on the way that the gold price “stumbled,” says Ibrahim Sory Berthe, advocate at LEX Africa member firm, Satis Partners.

“In those days Mali was an educational, cultural and commercial hub because it was a bridge from the north side of the continent to the south side,” says Berthe.

Fast forward to more recent times, the country has been faced with many challenges, including a number of military coups since 2012.

Mali has had two coups in the past two years and is currently run by a military power.

“We had a president and people wanted him to leave because of corruption and poverty. There were a lot of strikes, and people died for that,” said Berthe.

In August 2020, President Keita was overthrown in a military coup after months of protests demanding his resignation.

Then, in the wake of another coup in May 2021, the transitional president and prime minister were arrested and the leader of the 2020 coup was declared head of state.

“We thought the military would not stay too long and then they would leave. But they are now saying that they have to stay in power to tackle the security issues,” says Berthe.

He says it is not safe to travel around the country, for fear of being attacked by bandits and armed groups.

As a result of the latest coup Mali is under sanctions by the Economic Community of West African States (ECOWAS) and the West African Central Bank has frozen Mali assets.

“So, sending to or receiving money from outside the country is a problem.

“If they are given a timeline to have an election they will unlock the account,” says Berthe.

Other on-going challenges include the need to improve education, and tackle corruption, he says.

“And the legal system is in crisis, and there are food security issues.”

On the plus side, he says, Mali is a young country where some 50% of the 20 million population are less than 25 years old.

“We need to capitalise on that, invest in that, create jobs and encourage them to start their own businesses,” says Berthe.

Mali is the third largest gold producing country in Africa after South Africa and Ghana and gold accounts for over two thirds of Mali’s exports.

“We are also the largest producer of cotton in Africa,” says Berthe.

Beyond that, Mali is a huge producer of livestock and exporter of meat, although, being under lockdown from many of its neighbours makes exporting difficult.

Despite the countries many challenges, “The mining sector is attracting investment and the price of gold is climbing,” says Berthe.

He says Satis Partners is acting for an Australian client, Firefinch, which is opening a lithium mine in Mali 300 kilometres from the capital city. Firefinch also owns the Morila Gold Mine in Mali.

Another positive factor is that Mali’s local currency, the CFA Franc is stable because it is linked to the Euro. “One Euro is 655 CFA Franc and it never changes,” says Berthe.

“But we don’t do that. Satis Partners is a full-service business law firm, and 90% to 95% of our clients are from overseas.

“So, we are not feeling the crises as badly as other law firms,” says Berthe. Satis Partners is Malian, but it is an international law firm, which gathers lawyers from Mali and from abroad. He says, with seven lawyers and 15 to 20 paralegals, Satis Partners is one of the largest firms in Mali by headcount. “And we can provide services in English and French, which separates us from other law firms.”There are about 300 lawyers in Mali, and there are only about four to six organised law firms.

Satis Partners also has a presence in Senegal and Burkina Faso, focusing mainly on tax law and mining law. And it has partner firms in Chad, says Berthe. He says the firm is also planning to open offices in Ivory Coast, and in North America.

Satis’ main focus is mining and tax. “The mining sector is not affected by the crisis as other businesses and people have to pay their taxes.

Last year was a good year for the mining industry in Mali, says Berthe “We handled two to three M&As and we are currently working on several deals. I think this year will be good for us in that sector as well.”

No new laws or regulations have been introduced in Mali in the mining area since the military took over the country, he says. “They are military, so their main focus is on security.”

However, he says there has been some talk that they are drafting a new mining code.

If that happened it would not go down well with the mining sector, because a new mining code was implemented in 2019.

France is Mali’s historic ally, but many of the military force did their training in Russia. “We have a good relationship with Russia, and they didn’t want the French to stay anymore.”

As a result, according to international reports, the military is bringing in mercenaries from Wagner Group, a Russian-owned private military outfit.

“So today, we are dealing more with Russia than with Western countries.”

He says the Russia/Ukraine war has put Mali in a “hot spot”.

“We see that it is Russia against the Western Bloc, and we are friendly with Russia.”

When the voting was recently held in the UN General Assembly, Mali abstained.

Now Putin is said to be recalling Russia’s mercenaries from around the world, which means Mali will have fewer mercenaries to help protect the country.

He says more than one third of Mali’s budget is being financed by its partners like Canada, France, and the US.

“But it’s going to be difficult to convince them to continue to do that if we have the military in power and Russian mercenaries helping us on the front line.”

According to sources close to the situation, Mali is paying $10 million a month to Wagner Group to supply about 1000 mercenaries, which have been in the country for three to four months.

And the French are pulling out of the country in the next six months, with 2000 to 3000 military personnel. A European military contingent of about 1000 is also present in the country.

The military are well liked and they are supported by the people because they are fed up with the corrupt politicians, says Berthe.

“We have had that situation since 2012 and people were dying every day, so they want change right now.”

However, he said Mali cannot survive in the current situation for another six months and believes that a timeline will be set for elections.

Otherwise, the public servants cannot get paid and they will not be happy about that.

But it will be difficult to organise a national election with the security issues in the country, with terrorist groups like Al Qaeda on the loose.