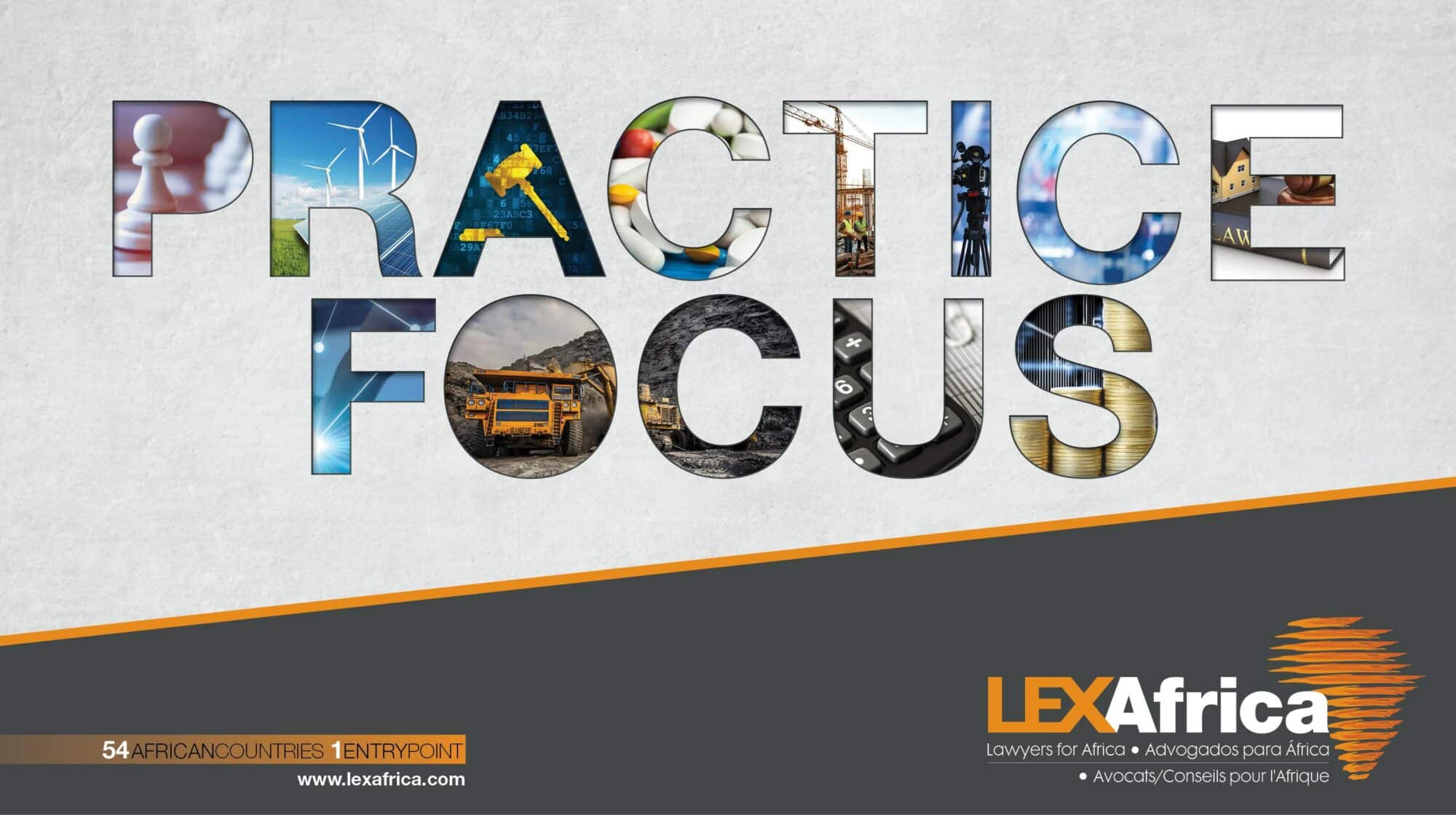 According to the recent Dealmakers Africa report, during the first quarter of 2022 the total value of deals in Africa – excluding South Africa – was $9,7 billion – an almost three-fold increase over that of Q1 2021 – off 196 transactions.

North and West Africa were the two regions with the greatest deal activity, each with 30% of deals recorded. West Africa gained the lion’s share of investment at $1,86 billion, with East Africa making a slight recovery at 23% of total deal volume.

LEX Africa member firms, from Nigeria, Angola, Rwanda, Guinea, Zambia, and Namibia who participated in this article provided interesting views on the M&A activity in their respective countries.

Examples of transactions that recently made it into the public space include the Titan Trust Bank acquisition of Union Bank, and the Interswitch and Seplat proposed acquisition of Mobil Upstream Producing limited.

Foreign investment in Nigeria is primarily by direct investment where the investor incorporates an entity in Nigeria or foreign portfolio investment which relates to shares acquisition. Some of the main investing countries in Nigeria are the US, China, the UK and the Netherlands.

Private equity investment helps companies to stay liquid and easily access capital without the challenges of high-interest rates or increased debt profile, says Giwa-Osagie. “It further provides investment returns to the private equity investor while giving them an opportunity to be involved in the development and growth of the company.”

Competition/Anti-Trust is a key regulatory issue in M&A transactions. The regulatory authority in Nigeria is the Federal Competition and Consumer Protection Agency (FCCPA).

The Agency has released guidelines and regulations on M&A transactions and penalties are imposed for failure to comply with these. The recently introduced Finance Act has also made certain amendments to the tax obligations for M&A transactions.

Other regulators are the relevant sector-specific agencies. “For example, for transactions involving financial institutions, the relevant agency is the Central Bank of Nigeria and its approval is required for such transactions,” says Giwa-Osagie.

“However, the extent of foreign participation in certain sectors such as aviation, security, and oil and gas is restricted. For companies in the oil and gas sector, a 100% foreign ownership may cause the company to lose certain competitive advantages.”

“The law provides a guarantee against expropriation of foreign investment except on grounds of public purpose and subject to payment of fair and adequate compensation,” says Giwa-Osagie.

Mergers in Angola are on the increase, both in the private sector, and the public sector, says Rosineide Romao, associate at LEX Africa member, FBL Advogados. “We believe that more mergers will occur in the financial sector.”

She says about two years ago the National Bank of Angola carried out an assessment of the quality of the assets of at least 13 commercial banks, making public many of their weaknesses. It concluded that many of them will need to merge to ensure the continuity of their business.

The Privatisation Programme 2019-2022 was approved through Presidential Decree in August, and provides for the sale of more than 70 public companies/assets, says Romao.

One of the M&A transactions that occurred in Angola in 2021 was the purchase of all the shares held by the Angolan State in Banco de Comércio e Indústria “BCI”, she adds. In the insurance sector, ENSA – Seguros de Angola, S.A., one of the biggest companies owned by the Angolan State, is also in the process of privatisation.

Another much talked about large merger is expected to take place in the oil sector, between ENI Angola SpA – Angola branch and BP Angola, says Romao. If it goes ahead, the merger could transform the Anglo-Italian company into the biggest exporter of oil produced in the country, with a good chance of dethroning the French company Total.

It is also expected that the multinational De Beers Exploration Holdings Limited will explore for diamonds in Angola again, under the agreement concluded this year with the Ministry of Mineral Resources, Oil and Gas.

Potential investors are required to notify the Competition Regulatory Authority (ARC), about their intention to conclude a merger or acquisition.

“BPR Atlas Mara, I & M Bank and Ecobank are examples of banks that have merged with international financial institutions. There is also the recent merger between KCB Bank and Banque Populaire du Rwanda (BPR) that occurred in May 2022,” he says.

Other M&A examples are Airtel’s acquisition of Tigo, the merger of BRD Advisory Services (BAS Ltd) and BRD Development Fund (BDF Ltd), and Sanlam Group’s acquisition of the Saham and Soras insurance companies.

Companies undertake mergers and acquisitions to avoid collapse, liquidation, and cessation of business, and to gain market share, among other things, says Deogratias.

He says in 2012 Rwanda undertook initiatives to reduce donor dependency.  “From that time there have been initiatives to boost the economic sector and improve the ease of doing business, which enabled more M&A transactions to be facilitated through the opening of doors for foreign investors.”

He says it is evident that most M&A transactions in Rwanda are now driven by foreign buyers. “It is very important as it is the main means of funding start-ups and other enterprises.”

M&A in Rwanda has become more noticeable since 2016, says Deogratias, “The Covid-19 outbreak also necessitated some acquisitions and mergers of companies and businesses, especially the threatened ones,” he says.

Abdourahim Bodeen Diallo, legal adviser at LEX Africa member, Thiam & Associés, says major M&A transactions in Guinea Conakry are generally dominated by foreign buyers, and mainly from foreign direct investment. Other sources include international institutions such as the World Bank and International Monetary Fund, as well as the Diaspora.

He says the CNUCED report of 2021 shows that there is a strong attraction of foreign investment towards Guinea Conakry, up from $44 million to $325 million between 2019 and 2020. “And naturally this is done, sometimes, through M&A operations or the setting up of consortiums.”

For example, a consortium owned by Singaporean, Chinese and French investors, with a 10% stake held by the Guinean government, was granted a 25-year concession in 2020 to develop the Simandou iron ore deposits, committing to invest $16 billion.

Diallo says Thiam advised High Power Exploration (HPX) in its acquisition of 95% of the shares of SMFG, the company owning the Nimba iron ore mining project, and the negotiation of the amendment to the mining concession agreement.

Sectors generally emphasised by the government for investment are agriculture (the country has more than 13 million hectares of arable land), mining, energy (a potential for 6,000 MW of hydroelectricity), infrastructure and ICT, says Diallo.

He says the main regulatory aspects of M&A operations in Guinea Conakry are the Investment Code, the Decree on Local Content, the Mining Code, the Tax Code, the Labor Code, the Land and Property Code, the Environmental Code, the Energy Code and the Agriculture Code.

“As for the legal framework for foreigners, it is very favorable for investors.”

The Investment Code of 2015 allows foreign investors to hold up to 100% of the shares of the company they plan to create in Guinea Conakry, except in reserved sectors such as radio, television or periodicals, he says.

“Moreover, the Investment Code guarantees the same rights to to foreigners and they benefit from the same treatment as national investors.” The investment code also offers fiscal and customs advantages to investors, he adds.

“The foregoing notwithstanding, we anticipate an increase in the number of applications received by the Commission for the year 2022.” She says this assumption is based on the change of government, which took place in August 2021, and the focus of the New Dawn government’s policies on increasing foreign direct investment in Zambia.

She says the private equity market is largely underdeveloped in Zambia. “However, there has been increased emphasis on its importance, as it allows easy access to liquidity as an alternative to conventional financial mechanisms, such as high interest bank loans.”

Zambian law provides that before any merger/takeovers can take effect, authorisation must be sought from the Competition and Consumer Protection Commission, says Coleen Namuyamba, associate at Corpus.

Merger transactions relating to publicly listed companies may also require the approval of the Securities and Exchange Commission (SEC), she says. Prior regulatory approvals with respect to certain transactions in the mining, energy, and telecommunications sectors are also required

There are currently no exchange control regulations in Zambia and, as such, individuals are free to transact in any currency other than the Zambian Kwacha, says Namuyamba. Furthermore, there are generally no restrictions on foreign investors in any sector of the economy, although there are some restrictions relating to certain sectors.

“The regulatory framework is generally investor friendly, as several tax and non-tax incentives are granted to investors through the Zambia Development Agency. “However, the requirements for setting up business in Zambia tend to be lengthy, costly, and centrality of applications with the different regulators requires improving,” she says.

Raimund Strzelecki, associate at LEX Africa member, Koep & Partners in Windhoek, Namibia says, “We have seen an increase in M&A transactions across all sectors, particularly mining and energy.”

He says the firm has also seen strong interest from international private equity firms in capital markets and mining and energy, particularly oil and gas. However, he says, there has been a decrease in local private equity investment activity, primarily due to the economic downturn caused by the COVID-19 pandemic.

Namibia is an investor-friendly destination for foreign investors, especially for M&A transactions, and at this point, it seems unlikely that the government will change the current investment framework, says Strzelecki.

“The key regulatory issues for M&A transactions in Namibia are competition/antitrust, exchange controls, tax, and sectoral regulators in, amongst others, financial services and telecommunication.”

On the local content front, he says the Namibian parliament tabled the National Equitable Economic Empowerment Bill in 2020, which will introduce broad local content/ownership requirements. It has indicated that it plans to introduce and pass legislation to implement this in the future, although it is unclear when it plans to do so, says Strzelecki.