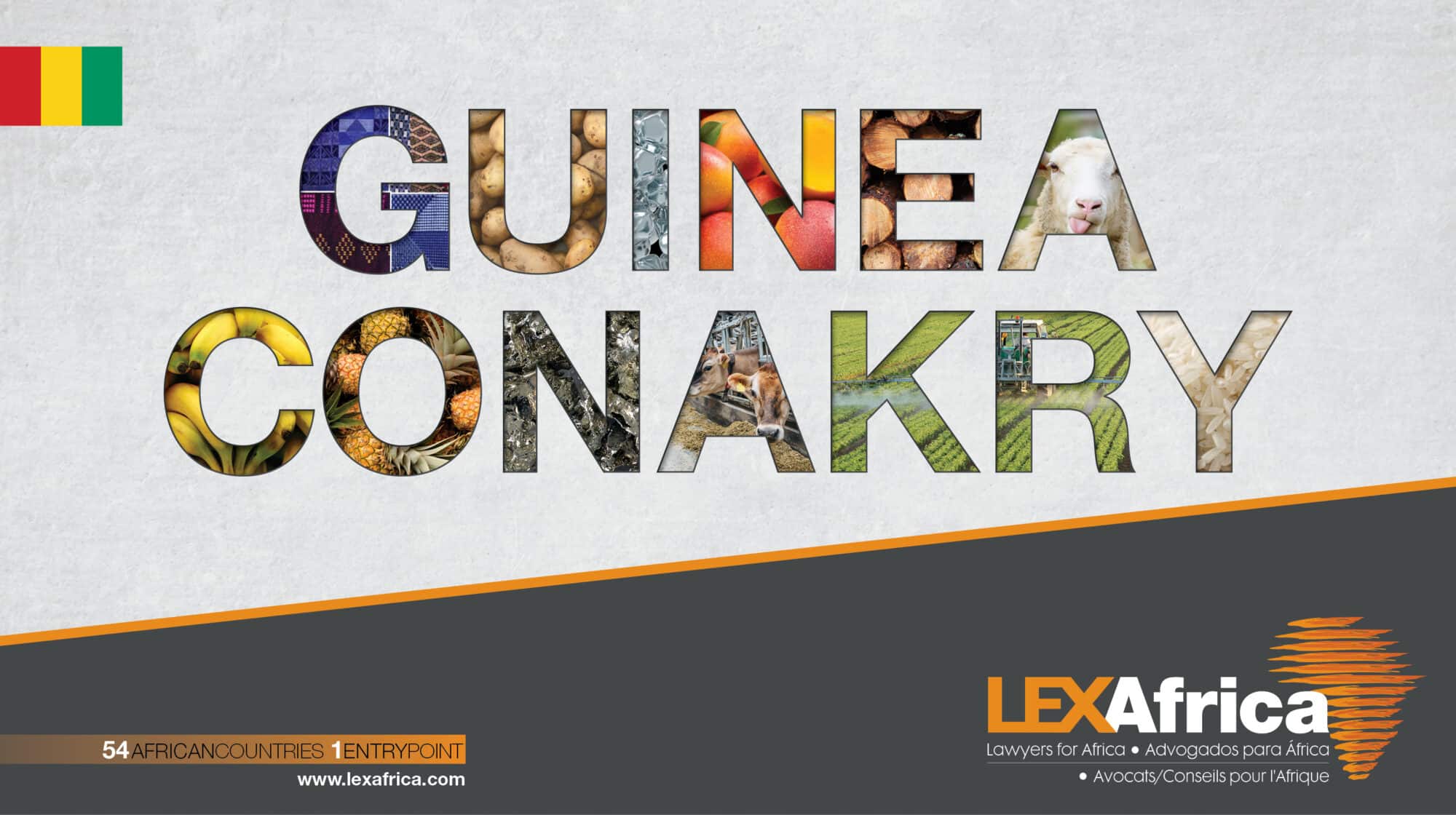 Guinea Conakry is a West African country known for its rich mineral resources, including bauxite, iron ore, and large deposits of gold, uranium, and diamonds.

The country has a population of about 13 million people, its capital city is Conakry, and it is bordered by Senegal, Sierra Leone, Ivory Coast, Guinea Bissau, Liberia, and Mali.

Amadou Barry, avocat at Thiam & Associates says Guinea Conakry’s history is a mix of missed opportunities, a huge wealth of untapped resources and good opportunities ahead.

The country is naturally gifted with minerals, arable land, lush vegetation, many rivers, impressive mountains, beautiful beaches, and huge forests in the south east of the country.

“One of our most appreciated mountains Mount Nimba has one of the richest untapped deposits of iron ore in the world,” says Barry.

He says corruption in the past lead to litigation involving the mining rights for the iron ore on Mount Nimba.

New licences were subsequently negotiated and established with Rio Tinto and the international Winning Consortium.

“The Winning Consortium also has a licence to mine bauxite at a site that is 1000 miles away from the iron ore source.”

Guinea is blessed with good rainfall across the country and the largest number of rivers in the West Africa region originate in Guinea, says Barry.

Thanks to Guinea’s plentiful water resources, over the past 10 years the recently deposed government built a lot of dams across the country that are producing hydro electricity, which is very clean power.

“For years we had power outages, but now almost all areas have electricity.”

However, he says, the government did not build the infrastructure for a clean water system that would benefit the whole country.

“This is an opportunity for foreign investment, and we are already seeing some interest in that area.

“And the mining sector is another opportunity area for attracting investment.”

Guinea also has the potential to attract tourism, but does not currently have the infrastructure to support it, such as roads and hotels, says Barry.

“Over the past 10 years Côte d’Ivoire, and Senegal have built highways, whereas in Guinea, we are still debating improving the small roads we have.”

He was re-elected in 2015, but faced protests four years later when he changed the constitution to run for a third term.

Then, in September 2021, the leader of Guinea’s special forces, Mamady Doumbouya, overthrew Alpha Condé in a coup on the basis of corruption and mismanagement, and announced an 18-month transition to democracy.

Barry says some are linking the recent coups and other problems in West Africa back to colonialism.

“Some say, the reason Anglophone countries are leading economically is that they cut their ties with the UK and have control over their own economy and their own political systems.”

Meanwhile, in Guinea there is a view that the country has never cut its colonial ties and that all decisions still have to be approved by France.

“The reality is that if we as Guineans don’t take responsibility and face our own challenges we will never make the changes we need to make,” says Barry.

However, he says, it is true to say that the French are hanging onto Francophone Africa and won’t let go.

“For example, the French supported the military coup in Chad, but when there were coups in Mali and Guinea, they did not do so.”

After 50 years of independence, one of the reasons Guinea is lagging behind, is bad leadership, says Barry.

And when investors came into the country, the money was not used to build infrastructure, schools and a health system.

“That is why we are looking for how to get out of this situation and start a new chapter bringing us up to the level of more developed African countries. And that’s all up to leadership,” says Barry.

On whether Guinea has any potential leaders to run the country, he says it’s difficult to know if someone is going to be a good leader until you have seen them performing.

“No matter how right someone looks to be a leader and has all the characteristics of a good leader, one cannot judge that person until they get into power and behave as a leader.

“We all praised the previous president Alpha Condé for his democratic principles and good governance, which he fought for.

“But he came to power for 10 years and decided to run for a third term, and nobody expected that from someone who fought for democracy.”

On the plus side, Barry says, the military coup is opening up a lot of interesting opportunities for the future.

For many Guineans, the coup represents an opportunity to clean up the mess, start a new chapter and make sure the rules and regulations are efficient and respected by everybody.

“There is a lot of hope across the country, because the coup is seen by many as a reason to expect better days ahead,” he says.

Guinea has currency issues that are “related to a bunch of factors,” says Barry.

But Guinea has its own currency, the Guinean Franc, which is good for independence, but if it is not well managed it will be a mess.

In the more than 50 years since independence a lot of bad decisions have been made about the Guinean currency.

“The government printed money to bail them out, and they spent crazily, which caused inflation.

“But since the military came to power, we have seen an improvement in the management of the currency over the past six months,” says Barry.

The stealing related to corruption and other bad behaviour stopped and this trend is expected to continue.

“In my mind, the biggest challenge Guinea is facing is the discussions with ECOWAS about the military transition.

“They are pressurising the military to provide a blueprint for the transition and how long they intend staying in power, so that we can get back to a more constitutional way of being.”

But the deadline of 25 April that ECOWAS set has come and gone, and everyone is expecting sanctions, like those imposed on Mali.

“In Mali the banking system has been halted and trading with its neighbours is prohibited, among other difficulties.

“We don’t want to get into the situation where the community casts us aside for political reasons,” says Barry.

Guinea is dependent on international imports from Asia, Europe and the US for almost everything the population eats or uses, says Barry. “We don’t trade that much with African countries.”

However, he says, the African Continental Free Trade Agreement (AfCFTA) is a huge opportunity for Guinea and other African countries to trade with each other.

“In the ECOWAS region we already have a free trade area. But AfCFTA will expand this further.

“But to take advantage of this, Guinea needs to invest in infrastructure,” says Barry.

The country can and does produce fruit, including mangoes and oranges and it is growing potatoes. There is also potential to grow rice, although it is not doing that.

A major hurdle is that there is no facility or technology to enable produce to be stored for lengthy periods, he says.

Thiam & Associates is a full-service business law firm that advises clients across West Africa on mining transactions and M&A, and works with banks on syndicated law, among other things.

“We have a lot of diverse international clients from China, the US, France, Germany, Switzerland and other parts of Europe, who we assist in the mining, energy, and banking sectors.

“For example, we have clients that have invested in buying banks in Guinea and Burkina Faso.”

As far as new laws are concerned, tax reforms by the previous government, simplified the system and introduced improvements.

But more importantly, the military leaders have set up a special tribunal to prosecute economic and financial crimes, which is something new in Guinea, says Barry.

“They are right now issuing subpoenas to previous political leaders, and the former prime minister of the country is currently in jail.”

What’s in a name

As a final point, Barry says the fact that there are three different Guineas in Africa is a throwback to colonialism.

And Equatorial Guinea, which is in central Africa, was controlled by the Spanish.

“That’s why in Guinea Conakry we speak French, in Guinea Bissau they speak Portuguese and in Equatorial Guinea they speak Spanish.”

Equatorial Guinea is credited with being the only Spanish speaking country in Africa.